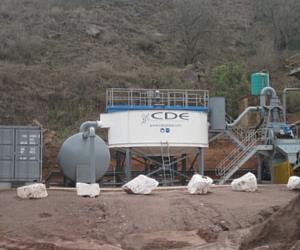 The loss of quality fines during the sand processing phase of production has been eliminated following the introduction of the CDE Evowash plant to replace a bucket wheel de-waterer previously employed at the Sterkspuit site.

NPC also report an industry first with the introduction of an Aquacycle high rate thickener allowing for the recycling of 90% of the water used in the washing of their crushed material.

While thickener systems are in use throughout the mining sector in South Africa it is believed that the CDE Aquacycle now in operation in the first of its kind in a crushed rock or sand and gravel application.

NPC are a subsidiary of global construction materials producer, Cimpor of Portugal and operate eleven facilities in South Africa with total production of 1.7 million tons. These include seven ready mix concrete plants, three aggregate production plants of which Sterkspuit is one, two grinding plants and one cement plant.

Sterkspuit quarry is located in the Cliffdale area some 30km from Durban on the eastern coast of South Africa. The CDE washing plant is processing Tillite from the existing blasting and crushing operations and the washed material is being sold by NPC for use in the production of various asphalt mixes and as a replacement for river sand in their own concrete plants.

From the crushing plant the minus 9.5mm material is first sent to a CDE Prograde P2-75 double deck rinsing screen fitted with modular Isenmann polyurethane panels on both decks. The Prograde produces a 6.7-9.5mm and a 5-6.7mm aggregate with the minus 5mm material being delivered to the sand washing phase. 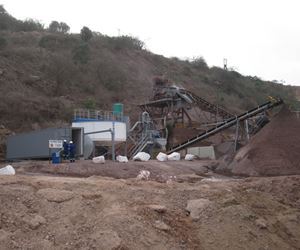 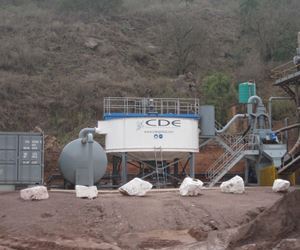