Manufactured sands as an alternative to river sand mining in India 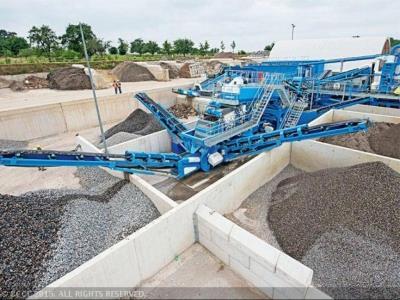 The destruction of riverine ecosystems by indiscriminate sand mining is gradually giving way to a lightly regulated industrial-scale production of manufactured-sand with support of large corporates. It is lending some respite to city administrators and affected communities, writes Naren Karunakaran of Economic Times. This article also features excerpts from CDE clients who share their real life experiences with .promoting Manufactured sand that has not only addressed environmental issues and but also improved delivery and cost of construction projects in India. Read how CDE Asia created this entirely new marketplace in India.

Donald Trump, real-estate mogul and US presidential hopeful, in his typical swagger and bombast, has often derided climate change and environmental campaigns. Quaintly though, his maiden project in India, the twin Trump Towers, looming over Pune's skyline in luxurious resplendence, is addressing one of the most intractable environmental problems of the building and infrastructure sector in India — the rapacious mining and use of river-sand in construction.

Sand accounts for 35 per cent of the volume of concrete used in the building construction industry and as the country rides a growth trajectory, its demand has ballooned and led to the plunder of river beds. The sand- mafia has lain waste scores of riverine ecosystems across the country. The marauders continue with their activity to this day — despite several court interventions and recurring bans — as the overarching view is that there is no alternative to river-sand.

The situation has even triggered the import of huge consignments of river-sand from the Philippines and Cambodia, violating ecology and trade norms even in the countries of origin. The inevitability of riverbed mining for growth and development, however, is a myth. It's not true.

Real-estate developers keen on pushing the environmental agenda have cracked the problem by supporting a whole new industry that is emerging. Manufactured-sand (m-sand) is finding leading-edge takers such as Panchshil Realty, the builders for Donald Trump, Mahindra Lifespace Developers, L&T Realty, and several others.

"We have almost eliminated river-sand in our projects through substitutions and wherever sand has to be used, we have switched to manufactured-sand," says Anita Arjundas, MD, Mahindra LifeSpace Developers. "It not only address' ecological issues but also improves project efficiency significantly."

The Mahindra World City spread over 1500 acres in Chennai, a project of pride for the company, had seen many hiccups in 2013-14 due to the non-availability of sand. With river-sand, developers and builders were often at the mercy of unreliable suppliers and the mafia.

Inexplicable price fluctuations, erratic supplies and inconsistent quality, varying with each truck load, were a common occurrence. Wastage is high, as high as 30 per cent, for river-sand has to be sieved before use. Sporadic lifting and imposition of bans by the government on sand mining only added the problem.

Rajesh Shetty, heading Mahindra's Antheia project, spread over 16 acres in Pune, has lately not only developed a clutch of local vendors, big and small, for manufactured-sand but has also crafted an entirely new concrete mix design philosophy using this material. "Reinforcing sustainability means starting from the design stage itself," explains Arjundas.

There is a cost saving too, for m-sand is cheaper than river-sand and its advantages are manifold (please see how different sands differ in quality)

Maruti Bhumkar, one of the biggest players in Pune, hawks m-sand at Rs 3,150 a brass (one brass is around 4.6 tonnes) when the prevailing price of river-sand is around Rs 9,000 a brass. Bhumkar, with five captive stone quarries and a fleet of 50 trucks, is also one of the key suppliers to the Trump Towers. "During peak construction of the twin towers, m-sand supplies had reached 25 trucks daily," he reveals.

What is manufactured-sand, or artificial, or engineered-sand, as it is described? M-sand is produced by passing boulders and stones through a series of jaw and cone crushers for size reduction and then fed into vertical shaft impact (VSI) crushers where they are pulverised further to the size of sand. The VSIs crush them to cubical and angular particles. In certain markets, this is flogged off as m-sand; it's a masquerade.

"This process is incomplete," explains Sandesh Mahale, director, MAAD Mines and Minerals, a pioneering m-sand entrepreneur who operates two plants on the outskirts of Mumbai, one of which is the largest in the country at 300 Tonnes Per Day (TPD) capacity. "From the VSI stage, the sand has to further go through a process of elaborate washing to remove dust and flaky particles."

Washing in a hydrocyclone process is apparently critical to the entire sand manufacturing process as it effectively removes excess ultrafines of minus 75 microns from the feed material. Ultrafines can be detrimental to the making of concrete.

Manish Bhartia, MD of CDE Asia, has introduced an array of high-performance crushers and washers in India over the past few years. He says the sand thus washed and dewatered is impurityfree and Ready Mix Concrete (RMC) ready. His manufacturing unit in Kolkata is jointly promoted by CDE Global of the UK and the Bhartia family.

Apparently these machines with washers that also help in dousing dust at production sites are a class apart from the crude equipment used at stone quarries.

That the concept of manufactured-sand is gaining traction can be gauged from the fact that, since 2007, when Bhartia began operations, he has been involved in over 60 crushing projects. One of his anchor clients is the Bhopal-based Dilip Buildcon which operates a cluster of 15 plants across the region.

Bhartia estimates that the collective output of msand across all plants would be merely 10 million tonnes per annum (Mtpa). "Of this barely 25 per cent of manufactured-sand produced comes into the open market," he says. The rest are consumed in-house by large developers and RMC units. The demand for sand is estimated at 500 Mtpa. The nascent industry is just about scratching the surface.

Interestingly, even large players are now venturing into m-sand. Ultratech Cement of the Aditya Birla Group has now installed a sand manufacturing plant in Mumbai. Mahale, however, writes off Ultratech as a 'follower' when ideally corporates should have been innovating and leading the way.

He is evidently bitter for he has had terrible experiences as a pioneering m-sand entrepreneur. When he was introducing the concept to developers in Mumbai five years ago, structural engineers often fobbed him off with: "Show me a building built with m-sand that has stood for 10 years."

His first plant of 80 TPH was erected with builder friends who partnered him and extended him advances in lieu of m-sand supplies. Bank loans were hard to get for an unknown technology and untried market. His networking ensured he remained afloat. Many of those in m-sand manufacture are politically connected; it helps them secure stone quarry licenses without much ado.

Mahale has had a reasonably good run, barring the present downturn in the realty market. His clients include some of the big names in Mumbai such as L&T, RNA, Rustomjee. The output from his smaller, first plant is entirely consumed by BG Shirke Construction Technology which has had an enduring partnership with the Maharashtra Housing and Area Development Authority (MHADA).

While m-sand gains traction in the market, the idea of abolishing the stone quarry bit in the system seems quite enticing. This is precisely what IL&FS Environment, a subsidiary of IL&FS, one of India's leading development and finance companies, is doing.

IL&FS is propagating the use of construction and demolition (C&D) waste for production of m-sand and other aggregates. It is operating India's first C&D waste recycling facility in Delhi with a capacity of 2000 TPD.

C&D waste is a huge problem in our metro cities. Delhi alone generates over 5,000 tonnes of C&D waste every day. Where does this waste go? It is surreptitiously dumped along roadsides or in water bodies, and in Mumbai, into stretches of mangroves along the seashore. The recent flooding of Chennai can also be partly attributed to this trend.

"In Navi Mumbai, if construction debris is cleared out from all the stretches it is dumped in, the city can recover land worth Rs 6,000 crore," reveals Bhartia, highlighting the intensity of the disposal challenge.

IL&FS Environment claims that its C&D waste management facility has helped save over 25 acres of land valued at Rs 250 crore. Its plant has processed over 20 lakh tonnes of C&D waste since it started operations and has recovered/recycled 95 per cent of the incoming waste. Enthused by the results of the pilot C&D recycling plant, several agencies including the PWD, Delhi Metro and municipal bodies have commissioned IL&FS Environment to setup and operate similar plants.

The only impediment to the adoption of recycled-sand (r-sand) has been the absence of clear government guidelines on the usage of recycled products as in the US or the EU. This has been addressed to an extent now: the Delhi government has issued an advisory to all departments to use a minimum of 10 per cent of recycled C&D waste in construction. It's about time to craft national guidelines on C&D waste.

While the transition from river-sand to manufactured- sand and recycled-sand is a good augury, there are environmental issues that remain to be addressed. "It is essential to ensure that these new genre plants adhere to strict pollution norms. Communities living near or around these plants are already restive," says Sumaira Abdulali of the Mumbai-based Awaaz Foundation that has been campaigning against illegal sand mining for years.

A few plants on the outskirts of Pune have already been forced to shut down by agitating farmers.