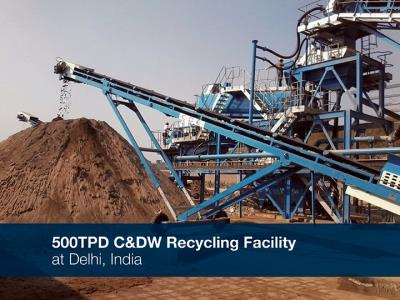 We are all quite familiar with the term ‘Urban Mining’ in which a city is viewed as ‘Urban Mine’ and resources are mined, or extracted, from what was once considered waste. Jesse Stallone would like to define it as “The process of reclaiming compounds and elements from products, building and waste”. Urban Mining may have started out in the electronic recycling industry but the concept has wider connotations when dealing with sustainable development.

In recent years the concept has been further extended to include recovery of sand & aggregates from the Construction & Demolition (C&D) wastes after the useable metals and the wooden structures have been extracted. In fact with the restriction being imposed on the natural sources of sand like mining the riverbeds or destroying hills & rock formations by wanton quarrying, the possibility of extracting construction material from wastes is attracting attention of the authorities. Construction and demolition materials are dumped by builders or individuals by the roadside, open places, open plots etc. and the Municipal Corporation lifts, transports and dump this material at dump yard by paying private operators. It is not only wasting precious land space but is also a great environmental hazard. C&D wastes form part of the Municipal waste (MSW) and the typical composition is shown below: 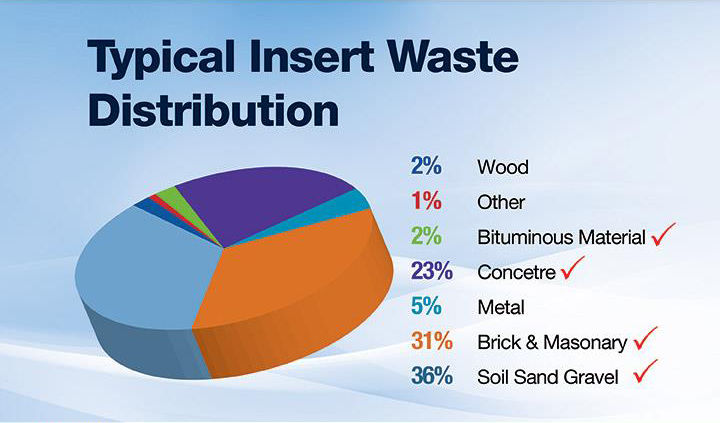 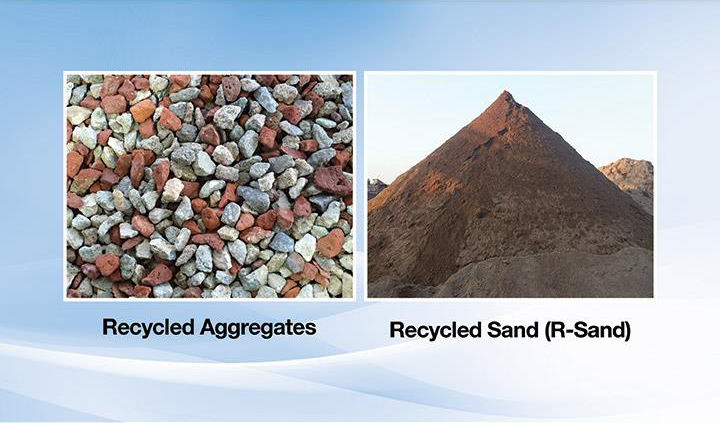 While the inert form almost 50% of total MSW of any city, the C&D component of the inert part is almost 20%. A conservative estimate shows that sand & gravel is 10-12% of the total MSW of a city. Today as per Department of Science and Technology estimate, annual generation of such waste is 530 million tonnes. Ministry of Environment & Forests has understood the magnitude of the problem from the pollution hazard point of view and has also appreciated the potential to recover valuable resources from the waste.

For the first time in the country the Centre has come out with rules to manage construction and demolition waste by prohibiting its dumping on roadsides and drains, a move aimed at reducing dust which contributes around 20 per cent to pollution in big cities, including Delhi.

The Construction and Demolition Waste Management Rules, 2016 brought out by the Environment Ministry also makes it mandatory for local authorities to commission C&D waste plants in million-plus population cities within 18 months, cities with population of 5-10 lakhs within two years and cities having less than 5 lakh people within three years.

Key highlights of the recent developments:

Terming the rules as a ‘weapon’ to tackle the issue of pollution, Environment Minister Prakash Javadekar said that the waste can actually be used as resource and the basis of the new rules is ‘recover, recycle and reuse’. “It is unscientific dumping. These are not actually waste but resources. The basis of our new rules is recover, recycle and reuse. We can make tiles, pipes from it. This creates value to waste. So we came out with draft rules three months ago. 111 suggestions were received. We are now publishing the rules," Javadekar told reporters here, adding that the rules have been uploaded on the ministry website.

The rules also make it mandatory for large builders or waste generators to submit waste management plan along with their building plan, non-deposition of which may lead to non-grant of permission to the building. Elaborating on some of the features, he said, "For every large generator, the permission for his building plan will only be given when he presents C&D disposal plan. So C&D waste management also becomes part of building permission. "If the generator is generating more waste and collection is done by municipal authorities, the collection and taking it to the recyle unit, the builders will be charged by the authorities," he said.

For large cities in India the waste generation quantity ranges from 1000-4000 tons per day. Analysis of the material as above indicates that it contains about 80% sand & aggregates mixed with clay & slimes. By washing of the material to remove silt & clay about 70-80% yield can be achieved. Normally the aggregates are crushed again to produce sand that fetches better price than aggregates. This in effect means that a large volume of sand can be generated from the city wastes and is available near to the city limits at competitive prices. The economics of this is obvious when measured against the cost of disposing off to different land filling sites and procuring equal amount of sand from other sources outside the city

There has been an issue with the acceptability of the recovered sand and aggregate by the construction industry. Under the new rules, state governments or construction agencies will have to mandatorily procure and utilise 10-20 per cent materials made by construction and demolition waste in municipal and government contracts mainly in non-load bearing applications like kerb stones, drain covers, paving blocks in pedestrian areas.

However there more robust uses of the material and the diagram below illustrates the areas where the sand recovered from C&D waste treatment could be used.

CDE is the leading technology in the world marketplace for their advanced C&D waste recycling technologies and have installed the first two plants in India for the city of Delhi.

But Delhi is not the only city to be affected by the issue of construction and demolition (C&D) waste disposal. As the construction industry continues to develop at speed across India, legislations will only be efficient if combined with innovative C&D waste disposal solutions that are adapted to the needs of each individual cities. Compelled by legal requirements and enticed by the availability of viable alternatives, the European construction industry has already embraced wet washing as a value for money – and environmentally-friendly – way to dispose of C&D waste. Boasting the largest wet washing plant for construction and demolition waste in the world, designed and built by CDE, Norwegian company Velde Pukk reflected on their success. "We opened discussions with CDE a number of years ago as we see the huge opportunity presented by the recycling of C&D waste to high quality, high value recycled sand and aggregates with a wide range of applications" said Managing Director of Velde Pukk, Mr Egil Velde. "We visited a number of existing CDE installations and have watched very closely the technological innovations from CDE in recent years, which combine to maximize material quality and minimize waste from the process”.